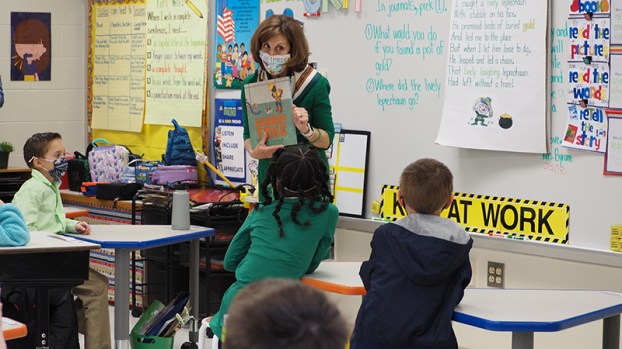 Virginia First Lady Pamela Northam and state Secretary of Education Atif Qarni are on a road trip to observe the reopening of the commonwealth’s public schools — which included a stop at Windsor Elementary School March 17.

As of that week, all but four of the state’s 132 public school divisions had resumed some type of in-person instruction. Some are bringing students back for the first time since March 2020, when Gov. Ralph Northam declared COVID-19 a public health emergency and ordered schools closed for a minimum of two weeks. But that’s not the case at Windsor.

Isle of Wight County Schools brought pre-kindergarten through third grade students back Sept. 8 on a hybrid schedule of in-person and virtual days, making it one of the first divisions in Hampton Roads to attempt a return to school buildings. By Feb. 16, pre-k through fifth graders had returned to five-day-a-week in-person schedules, albeit with a few changes. Students and staff must still wear masks. Dots line the hallways indicating to students where they should stand to remain six feet apart, and students still eat lunch in their classrooms rather than all together in the school cafeteria.

According to division spokeswoman Lynn Briggs, just over 400 of Windsor Elementary’s 550 students have returned for in-person learning. The remaining 25% of the school’s population has opted to continue learning virtually.

“Teachers have really stepped up to the challenge,” said Northam, who is herself a former high school biology teacher. “All the school personnel have worked so hard to make sure each and every one of them [the students] are safe here in school. They’re distancing; they’re wearing their masks. They’re actually making it fun.”

According to the division’s COVID-19 online dashboard, 22 of the division’s 5,388 students have tested positive for COVID-19 over the past four weeks; only five of those contracted the disease from an in-school contact. Two-hundred-thirty-two have had to quarantine due to exposure, 84 of which were exposed via an in-school contact. As of March 18, no Isle of Wight schools were listed on the Virginia Department of Health’s online list of schools reporting outbreaks, the term referring to two or more cases tied to in-school exposure.

According to the first lady, upwards of 80% of Virginia’s teachers have been offered a COVID-19 vaccine and more than 2 million shots have gone into arms across the state.

“It’s growing every day,” she said.

Briggs estimates roughly 60% of Isle of Wight’s 400 teachers have been fully vaccinated.

“We don’t know an exact number since we have not had on-site clinics for tracking purposes,” Briggs said. “We rely on employees to self-report and have conducted informal surveys to help give us an estimate.”

After touring Windsor, Northam remains convinced that reopening for in-person instruction is the right path.

“When we were looking at some of our scores coming in, literacy scores were down; many of our teachers were expressing concerns about the social/emotional status of our children,” she said. “As a teacher myself, I know their hearts hurt when they couldn’t have their students with them, but they did what was safe and what was more important at that time. But now that we know that it’s safe and we can get vaccines, and that’s safe and effective … they’re thrilled to have them back again.”