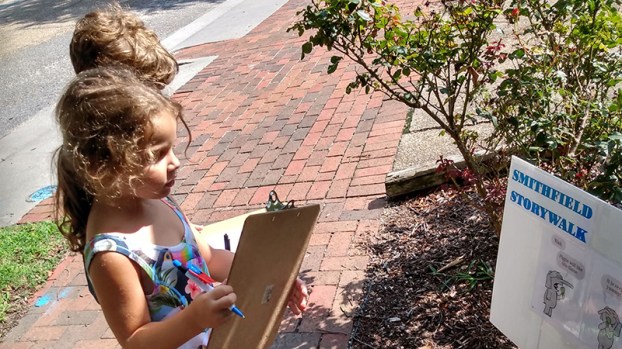 The Smithfield StoryWalk is returning for another installment themed for Earth Day. (Terry Andrews Photo)

A nationwide trend that’s become increasingly popular among libraries since the start of the COVID-19 pandemic will return to downtown Smithfield April 12-25.

That’s when the Smithfield branch of Blackwater Regional Library will host its next StoryWalk, an outdoor reading activity for children age 10 and under. The idea is for children to walk around town from sign to sign, each of which will display a different page from a children’s book.

When COVID-19 restrictions on public gatherings forced the library to cancel its indoor storytime activities, the Smithfield branch chose a book about ice cream for its inaugural event and partnered with the Smithfield Ice Cream Parlor to give participants who completed the StoryWalk a free ice cream cone.

“It was really popular,” said Branch Manager Terry Andrews. It was so popular, in fact, that the library has continued hosting them about every three months.

Last October, the library hosted a Halloween-themed StoryWalk on Hayden’s Lane, and one called “Santa Paws” around the Christmas holiday, which involved a book on rescued animals and helping your local animal shelter. Sometimes the signs will be placed in the windows of downtown storefronts.

“One of our purposes was to get people downtown to visit the businesses,” Andrews said.

The April 12-25 StoryWalk will coincide with Earth Day, and as such feature another walk down Hayden’s Lane where children can read “In a Garden” by Tim McCanna via signs made by Grafik Trenz LLC.

Participants can pick up their StoryWalk passports at the Visitor’s Center at 319 Main St. After the StoryWalk, they can return their completed passport to the Smithfield branch library at 255 James St. and receive a “Growing Readers” seed growing activity kit while supplies last, and register for a drawing to win a gift basket containing a copy of the book and some gardening supplies.

The concept of a StoryWalk, according to Andrews, began at the Kellogg-Hubbard Library in Montpelier, Vt., and quickly gained popularity nationwide — particularly since the spread of COVID-19, as an alternative to indoor events. The Smithfield branch has seen 150 to 400 children participate.

All children must be accompanied by an adult, and large groups such as churches or daycares are asked to register ahead of time by calling Andrews at 757-357-2264.

Not a done deal after all

Pursuit of vehicle stolen from IW ends in crash

Cole recognized as Citizen of the Year

‘There are still good people out there’

No prom for Smithfield, Windsor students

Second public hearing on Mallory Scott set for May 11