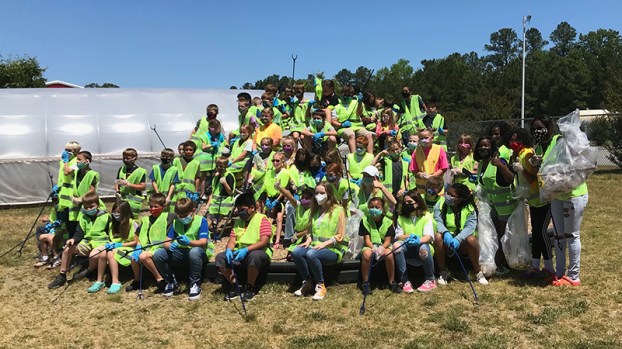 The Windsor Elementary students and SHS Beta Club volunteers hold up their bags of litter, showing how much they collected.

On her way to school, Smithfield High School junior Elise Ring would look out the car window and see trash everywhere on the side of the road.

“I felt that our community could do better,” she said.

So for her Gold Award project, the Girl Scout decided to do something about it.

The Gold Award is equivalent to Boy Scouts earning the rank of Eagle Scout. To earn the award, a Girl Scout must first complete two Girl Scout Journeys — a 6- to 12-month process for earning a badge — followed by completing a community service project that leaves a lasting impact, such as collecting food donations for a food bank or planting a community garden. Gold Award projects must be approved by a local Gold Award committee and require a minimum of 80 hours of work.

“For my Gold Award project, I knew that I wanted to do something involving the environment … I also feel strongly that education is the most important step to change, so I knew I wanted to involve the schools in some way,” Ring said.

So, with a little help from Smithfield High’s Beta Club, she partnered with Isle of Wight County Schools and the county’s Solid Waste Division to organize a series of schoolyard cleanup days for third-graders at each of the county’s elementary schools.

The project involves her making an educational presentation at each school, followed by breaking the students into small groups led by Beta Club volunteers to pick up litter on school grounds using equipment on loan from the Solid Waste Division. The Beta Club volunteers are tasked with ensuring students’ safety; they are not permitted near roadways or in parking areas.

Each litter cleanup activity took between 1-1/2 to 2 hours to complete.

“At the end of the clean up activity, we collect the litter bags and weigh them to see how much litter we have collected,” Ring said. “The school who collects the most litter wins!”

About 80 third-graders at Windsor Elementary participated, followed by 55 at Hardy Elementary. Westside Elementary was not included, as that school is for grades 4-6, but as part of her project, her lesson plans will be published on Isle of Wight County’s website for use by any grade level. She still has two more schools to lead through the presentation and cleanup, so a winner hasn’t been declared yet. The prize for the winning school will be a surprise that is only announced once each school completes the activity, she said.

“I hope that the students I worked with will take this lesson with them, and set a good example to their friends and family,” Ring said. “I would love to continue being an advocate for our environment in college, but I also hope that our schools will continue educating students on environmentalism after I graduate.”

Ring has been involved with Girl Scouts for 12 years, having joined in kindergarten.

“As I grew older, I stuck with it because it gave me a space to work with other girls my age, who all shared a passion for helping our community,” Ring said.