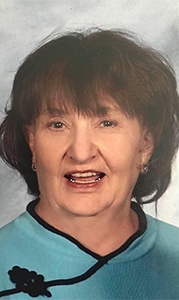 It is with great sorrow that the family of Karla Jean Oilschlager Timm Hearn announces her passing on June 4, 2021, in Newport News, at the age of 82.

Karla was a Valentine Sweetheart, born Feb. 14, 1939, in Wisconsin Rapids, Wis., to Theodore and Ethel Oilschlager, of Port Edwards, Wis.

Karla was baptized and confirmed at Trinity Lutheran Church in Port Edwards. She was a 1957 graduate of John Edwards High School in Port Edwards and went on to attend Gale Business School in Minneapolis, Minn., while working for Northwestern National Bank.

Karla returned to Port Edwards in 1958 and met a wonderful man in Kenneth Timm, of Kellner, Wis., whom she married on Feb. 14, 1959. They lived in Wisconsin Rapids, where Karla worked for Dr. N.H. Stolp as a dental assistant/bookkeeper for several years.

In 1994, Karla’s husband, Kenneth, unexpectedly passed away. Three years later, Karla moved with Kristy to Smithfield, to be with Kari and his family, who made their home there.

While living in Smithfield, Karla worked five years for Smithfield True Value Hardware and met a loving man in the Rev. Dr. Jarvis M. Hearn, whom she married on June 12, 2002.

Karla and Jarvis shared their musical talents and cherished taking trips on their BMW motorcycle. Karla enjoyed being a minister’s wife and the opportunity it afforded her to continue playing the piano/organ at churches in the Smithfield area. She also sang in the choir at Hillcrest Baptist Church while Jarvis was the interim pastor there.

In January of this year, the Lord suddenly took Karla’s son, Kari, home, and in April did the same with her husband, Jarvis.

In addition to Kenneth, Jarvis and Kari, Karla was also preceded in death by her parents, Theodore and Ethel Oilschlager; sister, Patricia Oilschlager; and stepson, Mark Hearn.

A celebration of Karla’s life will be held 3 p.m. Saturday, June 12, at Little’s Funeral Home, 1515 S. Church St., Smithfield. Online condolences may be registered at www.littlesfuneralhome.com.