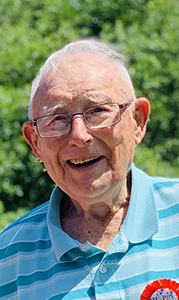 Arthur Franklin Drewery, 96, of Windsor, passed away on Friday, June 25, 2021. He was the son of the late Eddie Lee and Mary Munford Drewery. He was the youngest of six siblings.

Frank graduated from Isle of Wight High School in 1943 and shortly thereafter joined the Army and served as a paratrooper during World War II. He returned home to marry his high school sweetheart and worked at Home Beneficial Life Insurance Company for 40 years. Over the years, he has served the community in many organizations, including being a founding member of the Isle of Wight Ruritan Club, and was active until his death. He was a member of George F. Dashiell American Legion Post 49 and Smithfield Masonic Lodge. He was also an active member of Woodland United Methodist Church, including serving as a trustee and treasurer and sang in the choir for more than 60 years. He also volunteered with Meals on Wheels for more than 15 years and worked part-time with Colonial Funeral Home. He is fondly remembered as the “wedding and funeral singer.”

Frank was known by many names by his friends and family, including Daddy by his children, GiGi or Granddaddy by his grandchildren and great-grandchildren, Uncle Frank by his many nieces and nephews and Droopy by his Ruritan family.

Frank also leaves behind many nieces, nephews, cousins and friends, including his good friend, Mildred King.

A funeral will be held at 2 p.m. Tuesday, June 29, 2021, at Woodland United Methodist Church, Windsor, with burial to follow. A visitation will be held from 6 to 7:30 p.m. Monday, June 28, 2021, at R.W. Baker & Co Funeral Home and Crematory, Suffolk. In lieu of flowers, the family ask for memorial donations be made to the Blatchford-Raveling Scholarship at Woodland United Methodist Church. Checks can be mailed to Dee Steinert, 20051 Orbit Road, Windsor VA 23487. Condolences may be made at RWBakerfh.com.