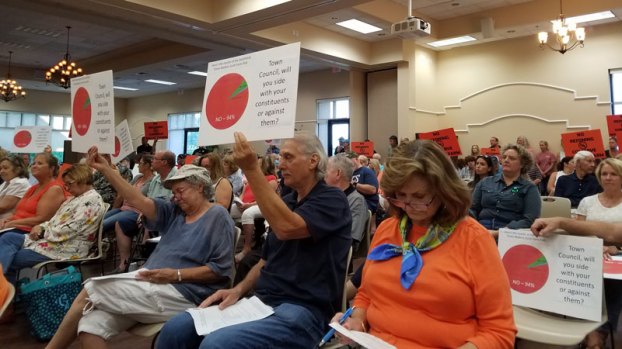 The now-approved requests — which included rezoning, amendments to the town’s comprehensive plan and zoning ordinance, three special use permits and two waivers — will allow Napolitano to build 107 townhouses, 198 duplexes, 507 single-family homes and shared amenities on 500-plus acres of farmland along Battery Park and Nike Park roads.

Councilwoman Renee Rountree made a single motion to approve all eight requests and accept the conditions and infrastructure improvements Napolitano had proffered, which Councilman Randy Pack then seconded.

Napolitano had previously planned to build 1,106 homes on the site but scaled it down to 812 after company representatives attended a meeting of the town’s Planning Commission last October where a number of area residents had argued the development’s large size would negatively impact Smithfield’s small-town charm and burden Isle of Wight County’s roads and schools.

Councilwoman Valerie Butler said she also supported the development, particularly since the townhouses and duplexes would be affordable for teachers, law enforcement and other working professionals.

“One of the things that I’m passionate about … is affordable housing,” Butler said. “And in the African American community too, that I’ve spoken with, that do support this community, the townhomes and the duplexes are affordable.”

But the roughly 26% reduction in scope hasn’t placated the project’s opponents. Prior to the vote, the council held its own public hearing on the matter separate from the October 2020 one and a second hearing this past May on the revised proposal.

The July 6 hearing drew more than 30 speakers in opposition, and a number of others who remained in the audience sporting “no rezoning” stickers or “Preserve Mallory Scott Farm” T-shirts distributed by a group calling itself Preserve Smithfield, Virginia. The group is led by Rescue resident Tony Viudez and is also behind the similarly worded orange yard signs that have appeared across town over the past several months, but not the same entity as Preserve Smithfield Inc., a group that formed several years ago to advocate for the preservation of the now-demolished 1730s Pierceville homestead and other historic structures downtown.

Some of the speakers referenced a May 7 traffic impact analysis the project’s developer and the Virginia Department of Transportation conducted, which predicts the 812 homes will generate between 500 to 650 additional cars per hour traversing the intersection of Battery Park and Nike Park roads.

Others drew attention to environmental concerns given the development’s proximity to the Pagan River. One speaker, a student at Smithfield High School, gave a first-hand account of crowded conditions in the county’s school system, which he argued would be made worse by the proposed development.

“Our school system is already overtaxed … it’s bad enough already,” said Jake Fales of Carrollton, a rising senior at Smithfield High. “There are classes that there’s no room for desks because you’re putting 30 kids in a room made for 20 … on our buses, there’s not enough seats. People are sitting in the aisles. That’s a safety hazard. By approving this development, you’re going to overtax our schools further, you’re going to overtax our teachers.”

That said, no more than 100 homes are to be occupied by 2022 per the conditions to which Napolitano Homes has agreed, and up to 125 homes per year in subsequent years.